A downloadable game for Windows and Android

Milk big tiddies on the beach to prepare your Coco-Nutshake!


Play for score in a 3-stage arcade fashion,
getting a coconut milkshake from our girl Latatta to relieve her breasts
of all the excess milk.

If you're doing well you might unlock sick shades
that change the worlds colors!

In order to download this game you must purchase it at or above the minimum price of $3.60 USD. You will get access to the following files:

Is there any chance we can make/unlock custom palettes?

That would be pretty complicated to implement I think... It's a fun idea though! xD

I used to own this on Desura 😭

is there an IPA of this game?

there isn't any real iOS support rn, maybe in the future but I can't say for sure

Somehow the eye censoring looked like a japanese ghost photo or those creepy japanese images
Anyways the possible theory that i can come up with is that this is not the original game, but a public and altered version of a cursed/forbidden game, the original game have the same character as this one, details about the character as follows: The pink haired girl in the current game is believed to be the descendant of the Medusa, as she can turns people into stone by looking into their eyes or make their eyes look into hers,  however, this descendant have the meta ability, which means she can and have stoned players, evident by some cases witnessed by the victim's parents, moreover, when the eyewitnesses checked the game, it couldn't be opened, as it immediately closes after double clicking it. The original game couldn;t be clearly identified as its content,  characteristics and storylines changes after cases, however it is consistent on one thing, a female character that have hourglass body and some hint of green on its "costume", and the character usually secretes a fluid of some sort, and it is theorised that the liquid is the souls of its unfortunate victims, evidenced by the lack of fluid upon its capture and containment

Another theory said that its the cursed game of kado no junyou, which  is related to the incident happened on ████-██-██, at ████████████████████,  the urban legend depicts that anyone who play the game will experience █████████ █████████ due to the coconut theme and the main character's large breast.

my brother in christ. what

Dude, what the fuck is he talking about???

How do you get the second last glasses?

What a fun game! I also appreciate the coconut aesthetic means so much for us coconuts :D I was originally told about this game from a friend and I have to say its pretty fun to play and kill some time with.

Awyee nice, good to hear you're enjoying it! =w=/

so i have got all the glasses, i got no difference between the last glasses and the previous one, does it just change color? The last glasses are quite difficult because everything has to be perfect

When Will This Come Out On Linux?

yea I agree to you man

I mean like thats just the style of the game tbh. Its hard to imagine it with her eyes revealed.

My man how do I unlock third glasses

How to unlock green glasses I tried everything ;-;

Get a perfect score in all steps-2700

Aw man yeah maybe we'll get support for that working sometime in the future, can't promise anything rn tho... still good to hear you like how it looks!

the art style looks really nice and well animated, cant wait to play!
ill comment on how the game was when im done playin

the game was really nice! short but with very good and fluid animations. good luck with any more games you may be making!!!

What do i need so it works.... downloaded the file but installation is not possible... help please

Oh where does it stop working for you? normally you should be able to go to your data files on your phone, and in the APK section tap the game file and it should give you the option to install it

Any chance this comes to mac?

It's not in the works rn... but maybe in the future

I dont know if it would be to much to ask but it would be so super cool if you could add a pair of Kamina's sunglasses from Gurren Lagann. I love them so much, it would be such a cool easter egg <3 <3 <3

Oh hellyeah thank you so much!! Kamina shades would've been sick ngl... xD

is there a way to cheat? cause I tried to and ended up having to redownload the game XD

eh what do you mean cheat? There is no built in way to cheat, only a free-milk automatic mode... what did you try to do? xD

tried to mess with the data information, learned the hard way haha

Lmaooo I mean like the data folder, I'm bad at lingo

Getting that last pair of shades was so tough but so satisfying, I really do feel like an expert milker haha!

can't perfect the game, mouse is either too sensitive for milking or not sensitive enough for shaking

It's tricky but you'll get a good groove going!

Oh where does it hold you up? Normally you should be able to just install it from your downloads...

It would be nice if u can do something more with that cocos, if u know what I mean ~_~

How do you get the 3rd pair of shades. I got all perfects

You're too good at the game then, try messing up more =w=/

I haven't bought the game yet, but it looks good, so I think I will! My only question is, why are her eyes covered? It seems strange to me.

Latatta runs a business that isn't really on par with gastronomical hygiene regulations, so she doesn't want to get recognized by any health authorities that might shut her down.

Please Turkish lira is very low, please allow free download, please I beg you, I have no condition, please

i cant get stupid

well that game was short.

XD nice, yeah sometimes just writing out a thought makes all the difference

Question: Will you plan to upload this game to Steam? Cuz I don't have either credit card or PayPal. Well, I do have a credit card but I can't really use it cause it's national use only

We do have plans to push our games to Steam, as of right now I can't really say when that will be though... sometime in the near future!

Hey thank you~ Free milk mode was a good addition for sure, stage 3 yeah fair enough... it mainly just wraps the whole thing up xD

Yeah, totally understood. Could have always had her shake it, and the more vigorously she does that, the more her skirt flips up --- but it's always about effort in and results out and the balance thereof, y'know? Still dig it.

Just bought this game to play on my phone. I wish, so badly wish it had more unlockable content.

But if there was a way to unlock more hair styles, bikinis, hats, skirts, or anything.

Probably won't be more unlockable content coming for nutshake, but I've definitely been thinking about a fix for the jank on the shaking minigame, as well as adding the option to use motion controls for shaking. How the system works currently is it calculates your average shaking speed, and if you fall within certain ranges it tells you if you're too fast or slow; But perhaps I could make it so that if you fall outside the good range, as long as your next average is better than the previous one then it could still reward points. I'll definitely have to test a system like that because I'm not quite sure how it'll feel. -Grey

Hello! I just bought this game for Android and I fell in love with the music and animation. Also, it's so cool that you've gotta be gentle with Latatta and not too aggresive. It's a nice touch. However, I was expecting to be able to shake my phone for shaking the coconut. It'd be awesome if you guys added that in the future, it'd be more inmersive.

Keep it up! I'll be willing to see more of your games.

Sorry I only saw this now! Glad you brought the question to the discord server too. I definitely have ideas for fixing the shaking minigame swimming around in my head now, as well as adding the motion controls. -Grey

Awesome!!! I recommended this game to a friend and he bought it, too. I'll recommend it to more people :D

Wow, this game, it's definitely something. I kinda like it, it has cool energy going for it. I really like the character design, artstyle, and smooth animation. It's a very unique game.

Glad you like the style Noli! We really did shoot for a unique experience with this one, so I'm glad it came across in the gameplay. -Grey

Appreciate this very much. Now I have a new game to alternate with Boobrun. Just perfect to pass the time, mindless and fun.

Glad you're enjoying it Dogroll! I'll have to check out Boobrun. -Grey 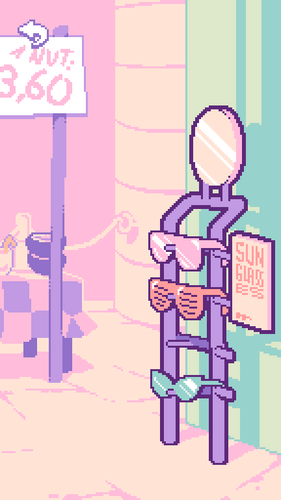